Tarot cards and other nonlinear tools for (self-)reflection have always wielded considerable fascination on me; it was thus easy for me to pick Suzanne Treister’s HEXEN 2.0 tarot deck from diffrakt’s library. Or actually it picked me, through one of the members of diffrakt, my dear friend Gala.

So let’s fool around with these cards.

Although I think acknowledging the philosophies behind the cards’ symbolism would have added compelling bits of hermeneutic computation, Treister’s set still favors a smooth transit into the tarot as system. The content of the cards does not seem to bear any substantial correlation with their counterparts in classical decks. Rather than intending to introduce esoteric methods for the attainment of knowledge, her project displays a conceptual analogy with the occult in its more unadorned connotation of concealed means for manipulation of the environment on the one hand and the pervasive, camouflaged intricacies among agents of biopolitical power for human regulation on the other. Her deck examines “implications for the future of new systems of societal manipulation towards a control society” in an increasingly virtual economic and social order.

To endorse a system of cards is to enable the possibility of shuffling. At its most basic, shuffling scrambles pre-existing patterns in the disposition of cards in a given deck. In the words of author Rachel Pollack – whose Seventy Eight Degrees of Wisdom is not (yet?) part of diffrakt’s library –, “the Tarot, the I Ching, dice, tea leaves, all really serve the same function. They produce random information.” In the HEXEN 2.0 deck, shuffling facilitates the visualization of linkages between different discursive agencies, at times in proximity to each other, on occasion (seemingly) distant.

On to shuffling, then. Three of Chalices: The Astrolabe. 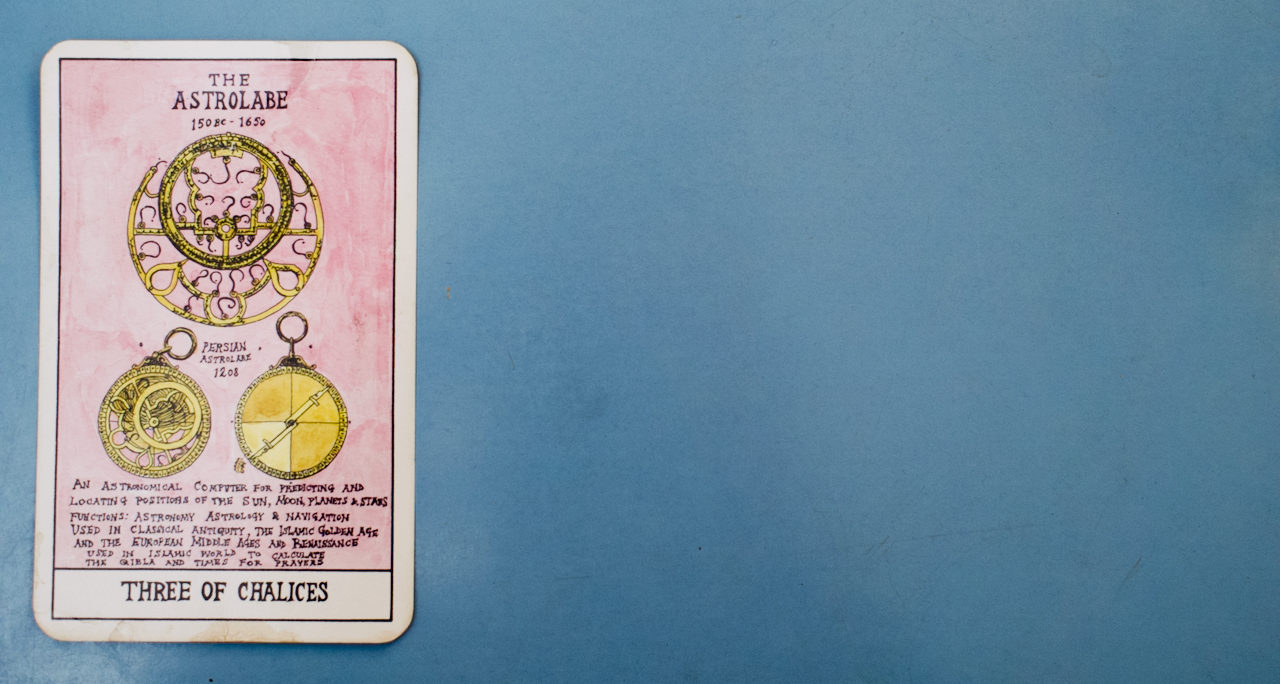 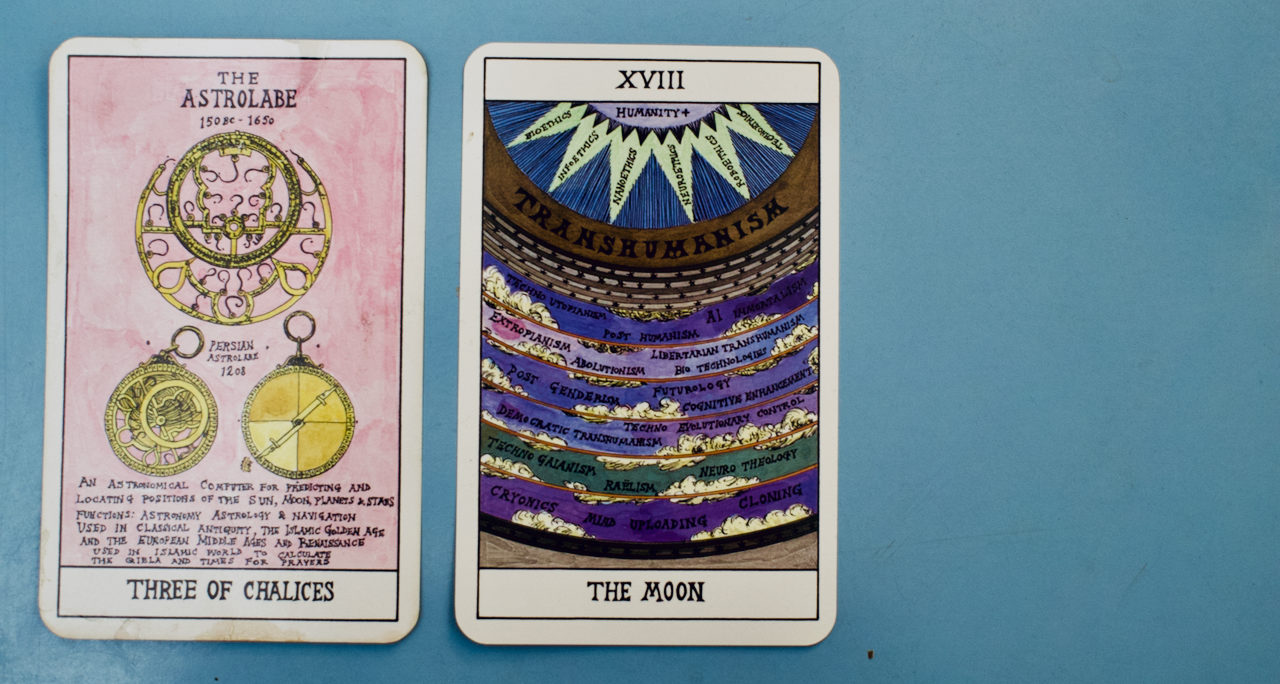 And a final one. Eight of Swords: US Cyber Command. 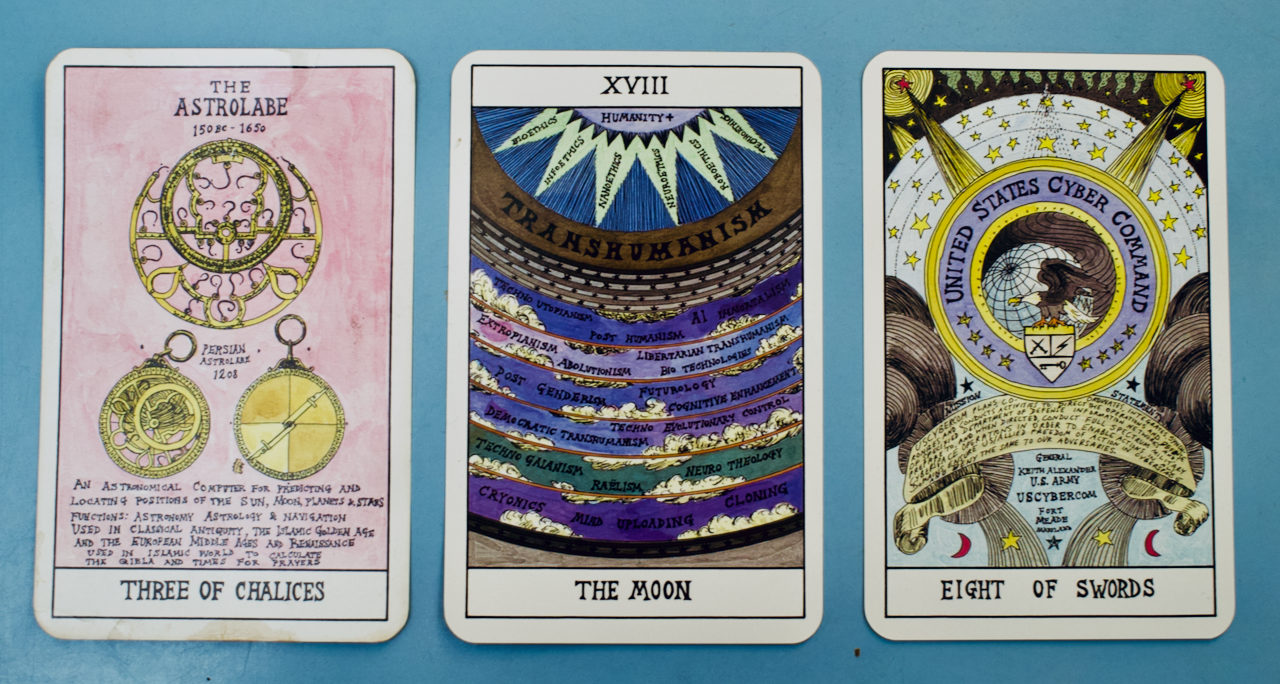 What connects these three cards? Regardless of the answer you seek, there you have it, you are pondering over it. Your dialogue with the cards has brought about a connection you perhaps hadn’t envisioned before, and, possibly, new information.

That is the great value of cards as a toolbox; that is the magic of Tarot. Confuse yourself with some random cards and enjoy it. No worries, rationality will not abandon you. Play with yourself, pick another card. Approach the library, any library, any conglomeration of informational vessels, your own knowledge included, as a deck of Tarot cards, whatever you think that might entail.

Never forget to keep your own head elastic by tricking it with random, perhaps rhizomatic sideswipes. It does not have to be a set of cards – it could be anything, really. There’s more to fun than fun: there’s creativity, and there’s a nice dose of humbling of one’s own neat set of mental grids, even the critical, intellectual ones.

By fooling our own system, we might contribute, albeit imperceptibly to others, to fooling Cartesian rationality in action. For decades now, many witty minds of western longitudes have been busy denouncing the Subject, its biopolitical construction and so on. Yet how uneasy do many become when presented with a set of rectangular pieces of paper donning cloaks of apparently arbitrary pictures, dripping with symbols? How open are we really to alternative ways of thinking about ourselves and about the cached codes of our cognition? What does it take to playfully unlearn by diffracting our own epistemo-cognitive baggage?

In Tarot, the Fool’s journey leads him to awareness via the twists and detours along the path of the major arcana, until he reaches the World. And if it is true, as I believe, that the world is in constant becoming, its codes open and shifting, then staying a Fool might turn out to be the snazziest way to be part of it.

back to the library