This text is an excerpt from the performance of THE OWL HOUSE WATCHES: A Hauntological Walking Tour by COVEN for feldfünf in the summer of 2020. It was in part inspired by Gloria Anzaldúa’s book Borderlands, borrowed from diffrakt’s library.

Thank you for joining us today. We want to tell you about what we have seen, although no one else will believe us. We want to present a fascinating universe of the aliens we met, who became our lovers, and oh what great lovers they were!!! They shared their stories with us, their messages, their poems.

But then they left.

They just left us, here on earth. It’s been incredibly isolating actually. So not only do we want to show you what we have experienced, we want your emotional support. We have, through the fabric of time and space, shared incredible information with these beings, laughing and crying together, and we DO want to share this with you, despite the emotional turmoil we are currently dealing with.

We are two more or less human beings named Frances Breden and Louise Trueheart. We’re a part of COVEN BERLIN, a queer love organisation here in Berlin, and we’re both big fanatics for paranormal activity. We’ve been waiting to make contact our whole lives.

When feldfünf invited us to explore the neighbourhood of Südliche Friedrichstadt, we were so excited because, by many accounts, it is haunted. The Friedrichstraße is full of history, which has left a buildup of ghost energy here. The paranormal readings of this neighbourhood are truly off the charts. This is known by open-minded electromagnetic scientists, such as Jacques Derrida and Karl Marx, who we read a bit about in college.

In the 90s, Derrida argued that, after the fall of the Berlin Wall, Marx would become even more relevant, and that “the West’s separation from the ignorance of the suffering still present in the world will ‘haunt’ it.” And we thought, “Huh? Haunting? Sounds worth investigating.” We came to this site knowing this – we knew the ghosts were here. What we didn’t expect was to be found by aliens.

Here is where the aliens found us. We were snooping around this playground for ghosts, and they approached us the way you would approach someone in a bar. I felt a slight tap on my shoulder and heard

They invited us to join them. Then we saw their starship growing out of the sand like a mushroom. The earth and the children around us in the playground stopped in their tracks, staring transfixed. 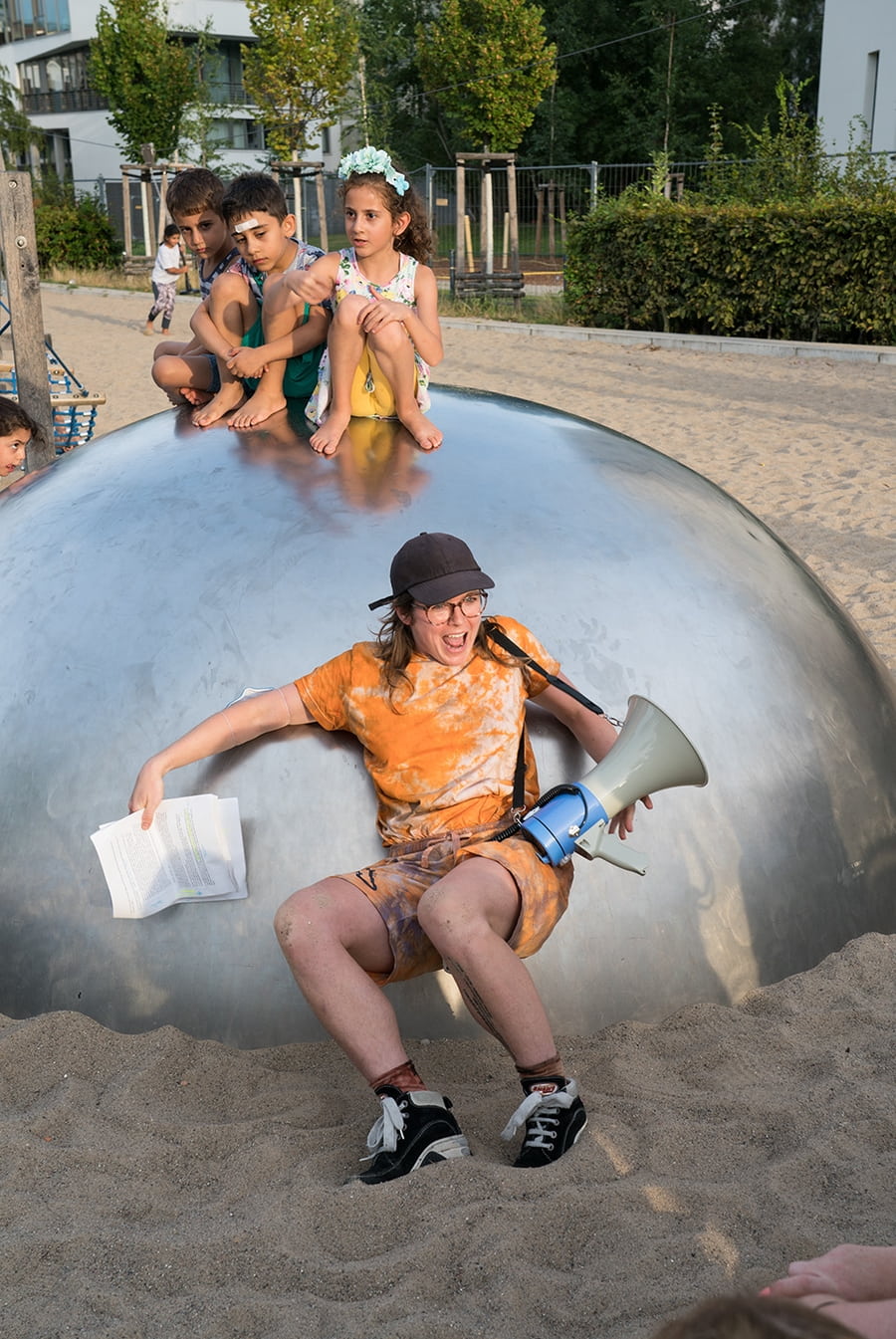 The spaceship grew higher. The children started shaking and wailing.

Trembling ourselves, we felt tears silently run down our faces.

In front of us we saw the most beautiful silver dome. We knew we had to go into the spacecraft. Later on, we would learn they had been cruising for lovers in the park, and had felt drawn to our vibrational openness.

We talked about a million things that night, and you can still hear the echoes of our chemistry and bond radiating out of the ship. If you listen closely, you can hear their words still:

They told us, if they told us their true names, the energy of it would fry our bones, so it was best to refer to them as SCHP-Alpha, -Beta, -Gamma, and so on. They explained that the closest English word for their forms was Shapeshifter. They created a CO2-like substance for themselves out of oxygen, much like us. But they conceptualised their bodily form very differently. They explained to us that in Alien SCHP cosmovision, there are as many genders as sentient beings.

The categorization of humans and non-humans according to their genitals or ability to carry babies or lay eggs was very unsettling for them. They did not understand why you would do this and not, for example, categorize people in their abilities to grow their own food or be able to sleep even if it’s loud outside. Since Aliens have a shapeshifting nature, that is, their bodies change in appearance and capability to reproduce according to factors like wellbeing and stress, there are no stereotypes or attributes that have become naturalized.

There is no sense of difference between production and reproduction for SCHPs.

At night, the aliens hatched out of the spaceship like an egg. When they first came to us in the flesh, we knew it was no longer time for talking. A warm electromagnetic field overtook us. It felt like each particle in our body was being rubbed, and rubbed, and rubbed. A blue light washed over us and it was as if we ceased to exist. Their smell was overpowering, intoxicating. We became lovers. Making love to an alien is very, very hard to explain. But once it’s happened to you, there is no going back. The light never leaves.

Now, dear listeners, as exciting, intoxicating, thrilling as the beginning of our relationship was, we would like to talk to you a bit about the intricacies of how it developed.

We need to process. And our friends are frankly really sick of hearing about it.

So, back in that intoxicating summer of 2011, we were really happy to find out as our relationship grew that the aliens were also into polyamory. Actually, we can say without a doubt that our time with them was our best experience of open relationships to date. Our human, or perhaps white, Western, capitalist-patriarchal notions of monogamy and family-building slid away as we slid with them.

With time, we learned also that our SCHP lovers can sexually connect with ghosts in order to have fun, but also to get a bigger understanding of the earth. Aliens, as they travel unthinkable space, and ghosts, as they slide through time, have a lot in common as travellers, and a lot to share with each other. Aliens think it’s silly to get “the bigger picture” only from those who are alive. We did struggle a bit with how our alien lovers were also having intimate energetic exchange with ghosts, because monogamy is ingrained in current society and we felt jealous and sad. We didn’t want to be human: we felt small, useless, and utterly unsexy in comparison.

We had to do a lot of processing and a lot of talking in order to open up to the idea of our alien lovers having sexual encounters with other beings – even if they were already dead. It was hurtful, especially since SCHP-beta always came back having shapeshifted into some silly Victorian clothes with a lace parasol after her encounters with her ghost lover.

If “Hauntology destabilizes space as well as time, and encourages an ‘existential orientation’ in the haunted subject, making the living consider the precarious boundary between being and non-being”, then humans are hopelessly living within the binary category of being in a way that ghosts and aliens do not. The inexorable straight arrow of time we travelled forwards along, our need to move by putting one foot in front of the other, and the oppressive layer of our skin keeping us in just one form, all looked so underwhelming in comparison.

Luckily, as we hung out and cruised with the aliens, we met some fellow open-minded humans who were going through similar things, and feeling really insecure about their alien partners. We would hang out and process at the Centre for Lesbian Converts and Lovers of Interdimensional Beings, AKA the Zentrum für Transzendentale Meditation in Berlin. Transcendental Lesbian Meditation helped us lighten up a little and ease into the flow of alien love.

We would like to invite you to meditate on a text that freed us greatly. Slow your breath, soften your gaze, unclench oyur jaw, feel your tongue in your mouth, listen to the slippery touch of the energetic radiation left here from the aliens, feel the ghosts penetrating your every pore, and engage in transcendental meditation of SCHP-Alpha’s poetry, as channeled through the Queer Chicana Poet Gloria Anzaldúa.

The thing about being more or less human is, our sensorial perception is hopelessly limited.

One day, the aliens left us.

We were devastated. Inconsolable. Sweatpants and Lieferando for a month heartbroken.

But slowly, our emotional perception opened up. The SCHPs stayed with us in our souls, our hearts, and the other organs they had touched.

They are with us in the beautiful street art of their faces we find tucked away in the city, their goodbye love letters to earth. And they’re with us every time we share our story with you.