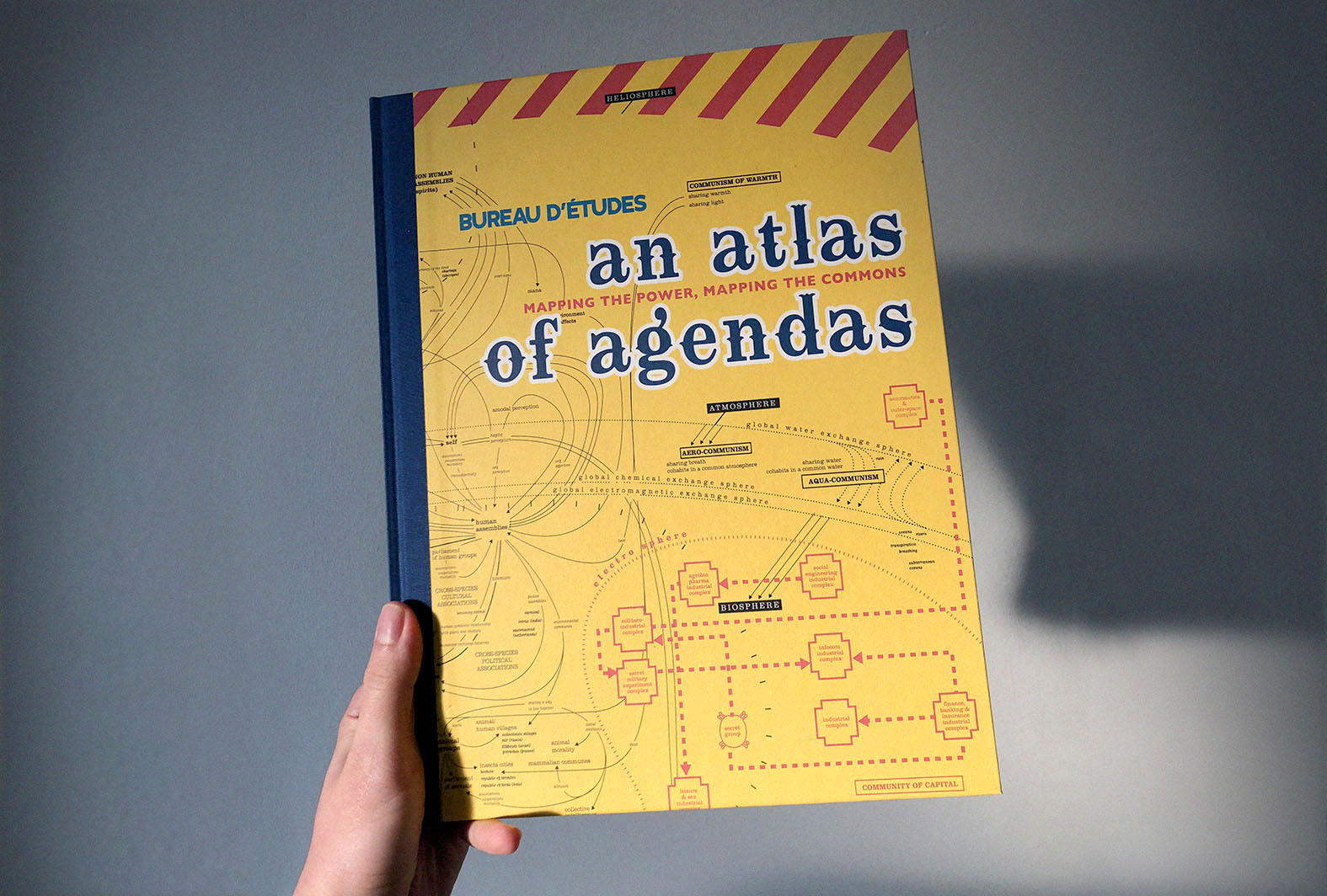 The word Atlas reminds me, first of all, of the many outdated books that I collect to think about the representation of space through the centuries. But it also reminds me of the mythological figure of Atlas carrying a large sphere on his back. The sphere sometimes represents the Earth, and at other times a celestial globe, or the universe.

In any case, an Atlas carries a world: be it as a cartographic collection, intended to encompass, exhaustively, the depiction of the globe, or as the exhausted figure who carries a world.

Of maps and reductions

Opening Bureau d’Études’s Atlas of Agendas, we find a magnifying lens, which we soon realize will be essential for diving into the maps drawn by the artists. It is also the guiding tool in a revealing movement of approximation that guides the reading of each diagram.

Bureau d’Études’s diagrams are composed of an enormous amount of information and connections, exposing complex realities described in tiny letters amidst a multitude of arrows. A cosmology of information spread out across maps, usually without any representation of space.

I read the maps as non-linear essays. By exposing the relationships between power structures, they create diagrams for thinking about the world. It is no longer a cartography created to represent spatialities; it is about places, locations and relations within an abstract system. Diagrams built with a purpose: instruments to dissect structures of an order of the world.

The diagrams lead me to wonder about the logic of reduction involved in cartographic thinking. In a sense, the idea of “reduction” might be considered close to the basic notion of representation – something is presented in place of something else, in a logic of substitution, a translation of one reality into another system. As such, maps can be understood as reduced versions of a complex system, a sort of division (split) of reality into various layers.

Mapping is closely related to the idea of visualizing information. But when the world gets reduced to relational data, it becomes possible to think through a network of codes that represent elements and beings (though there is a difference between the reduction of things in the world in the sense of representation and the reduction of all the components of our lives in tracing codes.)

A world, while reduced to minimum units, can be thought of as a world without space, without place, with a subject divided into general characteristics. But the notion of reduction applied to the map is not at all a matter of the simplification of complexities. “Reduction” in this context means a systematization of complexities that enable views of the world displaced from (and displacing) habit. 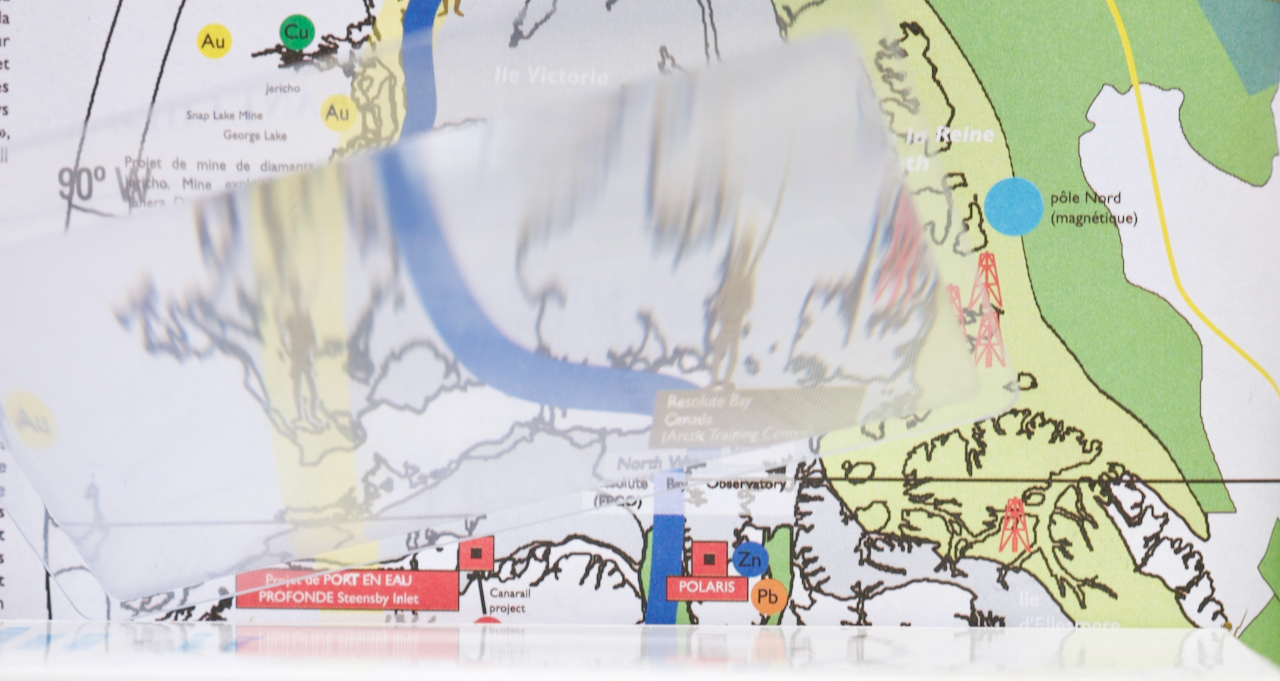 A rationalization of the world

A system of grids was applied to transform the Earth into a geometric model. The later definition of latitude and longitude outlined a precise framework for the representation of the globe: space got transformed into something measurable, and its measures have become common knowledge. The metric system was grounded on the logic of transforming what is “real” into something measurable. It decrees the translation from the experienced world into dividable or countable units of information.

The establishment of standard units to quantify space and time enabled coordinated action through diverse territories, used in the domination of distant territories as well as the development of globalized capitalism. Time and space understood through a shared parameter across the globe make the Earth appear smaller, more manageable – and a globalized world is based on this idea.“Discretization” is the concept behind the conversion of all things into measurable data. This notion, brought from applied mathematics, is used to define a process of transferring continuous functions of models, equations, or variables into discrete equivalents. But it also got adapted to social life: individuals become accounted for and characterized according to a general taxonomy of society (age, place of birth, place of residence, etc.), while the procedures of ordering and reduction exclude several other characteristics and turn individuals into combinatorial units. Individual characteristics become measurable and combinatorial, allowing a kind of “reduction” of the subject that renders it both placeless and displaced.

It is commonly assumed that maps cover over “reality”. But it is also true that realities “beneath” various other layers of representation can potentially be unfolded precisely through the use of maps. They may give us an overview of the positions within a system, even if this does not indicate any direct action. But in the Atlas of Agendas, maps are indeed meant to point out a direction toward a political response/action, and it is this specificity that distinguishes this atlas from other works of mapping. It is a matter of developing a description and analysis of power relations articulated across several spheres of the contemporary world; it is all about localizing: the definition of points and connections from where the relations (power, social, historical, spatial relations) are shaped.

Atlas knocks the world over

The figure of Atlas carrying the sphere on his back no longer corresponds to the conceptual construction of this Atlas of Agendas.

I imagine the mythological figure dropping the sphere (the world) onto the ground, the globe crumbling into many small parts. From these pieces, a puzzle could be assembled, but not to remake the original shape – Bureau d’Études collect the parts and reorder them in such a way as to create various relationships and approaches, using magnifying lenses to talk about the details found. It is from this image of the globe in pieces that the Atlas of Agendas begins.

back to the library